The rose festival in El Kelaa M’Gouna in Morocco, called Moussem, takes place every May of each year; when harvesting the precious petals.

This feast lasts three days; it celebrates the arrival of roses, an activity very widespread in the region of Kalaat M’Gouna, the valleys of Dades and that of M’Goun in southern Morocco.

Artisanal tourism region and sustainable economy
During this moussem, the population of Kelaat M’Gouna increases considerably. This region is popular with Moroccan tourists living in other cities of the kingdom and by many visitors from all over the world.

Tourists want to discover a region known for its perfumes and cosmetic products made from rose water as well as for the welcome and warmth of its inhabitants.

The festival is also an opportunity for visitors to El-Kelaa to discover its small fair and the artisanal and agricultural products of the region.

This festival contributes to the economy of the region by bringing back several sponsors and tourists each year. It is an annual tradition that dates back to the time of the protectorate.

On the occasion of these days of great festivities, the inhabitants of Kelaa M’Gouna and neighboring villages throw rose petals at visitors, sprinkle them with rose water and everyone comes together to elect the queen of roses. .

The women traditionally dress in white or black costumes, the men in traditional Djellabah very early on make their way to the city center, where everyone awaits the annual parade.

The Berbers decorate the houses with their petals, the women make necklaces and start songs and dances to celebrate the rose.

The parade includes traditional formations, “ahidous”, “gnaouas”, and folk dances including the saber dance, not to mention the chariot of the Miss Rose. The evenings are held in several rose gardens, everyone can dance there and especially participate in the election of Miss Rose, choosing, from among the young single girls registered, the one who will be elected queen for a day. 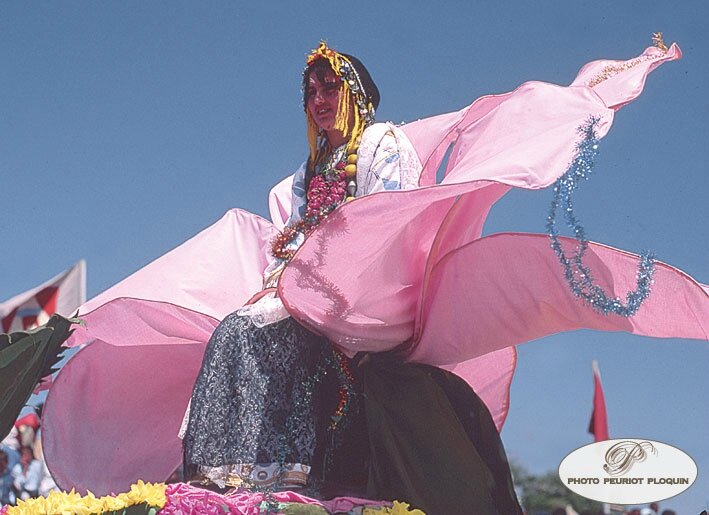 During the festivities, a young unmarried girl is then elected queen for a day and will then parade in a decorated and fragrant float, to the cheers of countless enthusiastic spectators treading the rose petals that litter the ground.

Need Help? Chat with us
Start a Conversation
Hi! Click one of our member below to chat on WhatsApp
The team typically replies in a few minutes.
Sarah Daniel